Original Cast-"Kiss Me Kate"(Columbia Masterworks 4140)-LP. This LP was released in 1950 and features the 1948 Musical Production of "Kiss Me Kate" starring Alfred Drake and Patricia Morison.Kiss Me, Kate is a musical with music and lyrics by Cole Porter. It is structured as a play within a play, where the interior play is a musical version of The Taming of the Shrew. Kiss Me, Kate was a comeback and a personal triumph for Cole Porter. After several successful musicals in the 1930s, notably Anything Goes, Du Barry Was a Lady, and Panama Hattie, he experienced an equestrian accident in 1937 that left him in constant pain. Following the accident, he continued to write songs and musicals but with limited success, and some thought he was past his prime. Kiss Me, Kate was a response to Rodgers and Hammerstein's Oklahoma! and other integrated musicals, and it proved to be his biggest hit and the only one of his shows to run for more than 1,000 performances on Broadway. It won the first Tony Award presented for Best Musical, in 1949.After a 3½ week pre-Broadway tryout at the Shubert Theatre in Philadelphia starting December 2, 1948, the original Broadway production opened on December 30, 1948 at the New Century Theatre, where it ran for nineteen months before transferring to the Shubert, for a total run of 1,077 performances. Directed by John C. Wilson with choreography by Hanya Holm, the original cast included Alfred Drake, Patricia Morison, Lisa Kirk, Harold Lang, Edwin Clay, Charles Wood, Annabelle Hill, Lorenzo Fuller, Eddie Sledge, Fred Davis, Harry Clark and Jack Diamond. The LP has been autographed on the front by Alfred Drake and Patricia Morison............CONDITION OF VINYL,COVER AND AUTOGRAPHS IS WEAK VG........................... 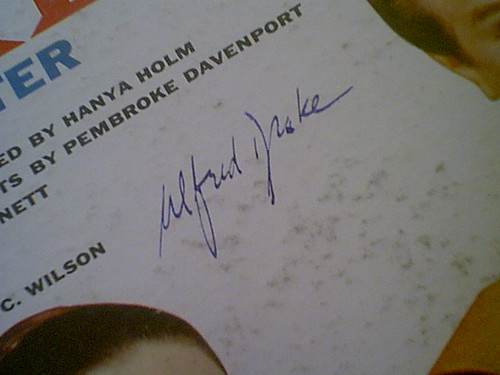