Original Cast-"Kismet"(Columbia Masterworks ML 4850)-LP. This original cast LP was released in 1953 and features the Broadway Musical-"Kismet" starring Alfred Drake.Kismet is a musical written in 1953 by Robert Wright and George Forrest, adapted from the music of Alexander Borodin, and produced by Charles Lederer. The musical was adapted from the book by Charles Lederer and Luther Davis, based on the play by Edward Knoblock. Directed by Albert Marre, with sumptuous settings and costumes by Lemuel Ayers, it premiered on December 3, 1953 at the Ziegfeld Theatre in New York in the midst of a newspaper strike and despite the sparsity of reviews survived, running for 583 performances. The strike, which allowed the show to become a hit through word-of-mouth, may have been a blessing since the reviews were not all favorable. One critic, punning on the name of the composer Borodin, disparaged the score as "a lot of borrowed din." The original production starred Alfred Drake as the poet Hajj, Doretta Morrow as his daughter Marsinah, Richard Kiley as the young Caliph of Baghdad, and Joan Diener as Lalume, the vampy wife of the evil Wazir. The show was even more successful in London's West End, enjoying a 648-show run at the Stoll Theatre. Columbia Masterworks Records recorded the original Broadway cast in late 1953; the recording was later reissued on CD by Masterworks Broadway Records.The LP has been autographed on the back cover by Alfred Drake with a fountain pen in blue........CONDITION OF VINYL IS USED. CONDITION OF COVER AND AUTOGRAPH IS VG............... 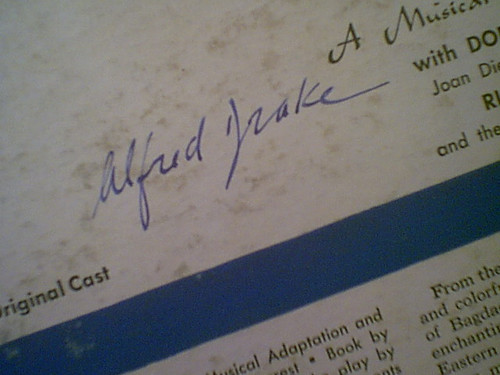