Alfred Dreyfus-"Five Years Of My Life 1894-1899"-McClure Phillips-1901-5" X 7 1/2"-310 pages-Hardcover Book-Signed BY Author.Captain Alfred Dreyfus of France was accused in 1894 of selling military secrets to Germany. He was convicted and sentenced to life in prison, but in 1896 new evidence surfaced that seemed to exonerate Dreyfus. The military tried to suppress the information and failed, and the case became a political firestorm. On the anti-Dreyfus side were royalists, militarists and Roman Catholics. Those defending Dreyfus were republicans, socialists and anti-clerics, including famed author Emile Zola, who was sentenced to jail for criticizing the government's role. The military would not acknowledge any injustice, and the case dragged on until Dreyfus was finally pardoned in 1906. After 101 years, the French army officially said they had been wrong. The affair revealed an institutionalized anti-Semitism in the army and helped unite the French left, eventually leading to the separation of church and state.The book has been autographed on the title page by Alfred Dreyfus with a fountain pen in blue............BOTH BOOK AND AUTOGRAPH ARE IN AVERAGE CONDITION......................... 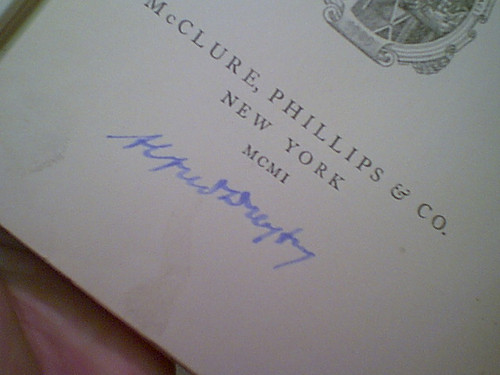