Original Cast-"Down IN The Valley"(Decca DL 6017)-Ten Inch LP. This original cast LP was released in 1950 and features the musical production of "Down In The Valley" starring Alfred .Down in the Valley is a folk-opera in one act by composer Kurt Weill and librettist Arnold Sundgaard, initially composed and conceived for the radio in 1945 then rewritten and produced in 1948. It uses famous American tunes to carry the story (including Down in the Valley, The Lonesome Dove, and Hop Up, My Ladies) and connected by original choral music.This short opera, originally running only about 20 minutes, was conceived as the first of a series of radio operas by Olin Downes, the music critic of The New York Times, and a businessman named Charles McArthur. The radio idea eventually fell through for lack of a sponsor, although Maurice Abravanel conducted an audition recording that was never broadcast. Hans Heinsheimer, the director of publications at Schirmer, approached Weill with a request for a school opera like Der Jasager for production by the opera department of Indiana University School of Music. Weill expanded and simplified Down in the Valley to a 40-minute version, and the revised version had its world premiere at that university in Bloomington, Indiana in 1948, directed by Hans Busch (son of Fritz Busch) and conducted by Ernst Hoffmann. Alan Jay Lerner's wife, Marion Bell, played Jennie. The piece was soon broadcast on NBC radio. In 1950, it was broadcast on NBC television.The ten inch LP has been autographed on the front cover by Alfred Drake with a fountain pen in black...................CONDITION OF VINYL IS WEAK VG. CONDITION OF COVER AND AUTOGRAPH IS VG............... 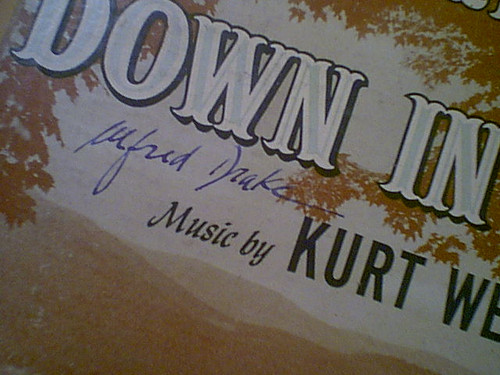