Broadway Rhythm (1944) is a Metro-Goldwyn-Mayer Technicolor musical film. It was produced by Jack Cummings and directed by Roy Del Ruth. The film was originally announced as Broadway Melody of 1944 to follow MGM's Broadway Melody films of 1929, 1936, 1938, and 1940. It was originally slated to star Eleanor Powell and Gene Kelly, but Louis B. Mayer and MGM loaned Kelly out to Columbia to play opposite Rita Hayworth in Cover Girl (1944). The film instead starred George Murphy, who had appeared in Broadway Melody of 1938 and Broadway Melody of 1940. Mayer then replaced Powell with Ginny Simms. Other cast members included Charles Winninger, Gloria DeHaven, Lena Horne, Nancy Walker, Eddie "Rochester" Anderson, the Ross Sisters, and Ben Blue, as well as Tommy Dorsey and his orchestra.......Thomas Francis Dorsey Jr. (November 19, 1905 – November 26, 1956) was an American jazz trombonist, composer, conductor and bandleader of the big band era. He was known as the "Sentimental Gentleman of Swing" because of his smooth-toned trombone playing. His theme song was "I'm Getting Sentimental Over You". His technical skill on the trombone gave him renown among other musicians. He was the younger brother of bandleader Jimmy Dorsey. After Dorsey broke with his brother in the mid-1930s, he led an extremely successful band from the late 1930s into the 1950s. He is best remembered for standards such as "Opus One", "Song of India", "Marie", "On Treasure Island", and his biggest hit single, "I'll Never Smile Again". The sheet music has been autographed on the front cover by Tommy Dorsey with a fountain pen in black....................BOTH SHEET MUSIC AND AUTOGRAPH ARE IN VERY GOOD CONDITION. 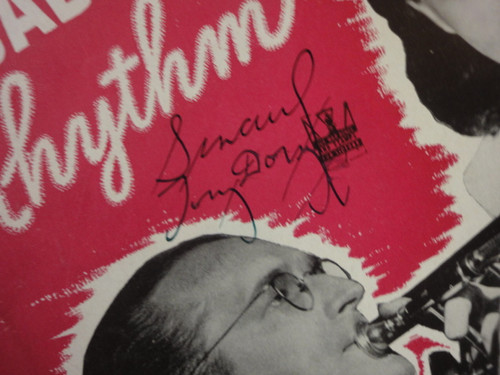