Thrill of a Romance (also known as Thrill of a New Romance)[2] is an American Technicolor romance film released by Metro-Goldwyn-Mayer in 1945, starring Van Johnson, Esther Williams and Carleton G. Young, with musical performances by Tommy Dorsey & his Orchestra and opera singer Lauritz Melchior. The film was directed by Richard Thorpe and written by Richard Connell and Gladys Lehman. The film tells the story of Cynthia Glenn, who, after a whirlwind romance, marries a rich businessman. However, on the first day of their honeymoon, her new husband is called away to Washington, leaving her alone at a resort. During this time, she meets and falls in love with a war hero, Tommy Milvaine, played by Van Johnson. This was the second of five films that paired Williams and Johnson together. Made over a period of eight years, those that followed were Easy to Wed (1946), Duchess of Idaho (1950) and Easy to Love (1953). Thrill of a Romance was a box office success, becoming the seventh-highest-grossing film of 1945.................Thomas Francis Dorsey Jr. (November 19, 1905 – November 26, 1956) was an American jazz trombonist, composer, conductor and bandleader of the big band era. He was known as the "Sentimental Gentleman of Swing" because of his smooth-toned trombone playing. His theme song was "I'm Getting Sentimental Over You". His technical skill on the trombone gave him renown among other musicians. He was the younger brother of bandleader Jimmy Dorsey. After Dorsey broke with his brother in the mid-1930s, he led an extremely successful band from the late 1930s into the 1950s. He is best remembered for standards such as "Opus One", "Song of India", "Marie", "On Treasure Island", and his biggest hit single, "I'll Never Smile Again". The sheet music has been autographed on the front cover by Tommy Dorsey with a foutain pen in green and Esther Williams with a fountain pen in black..............BOTH SHEET MUSIC AND AUTOGRAPHS ARE IN EXCELLENT CONDITION. 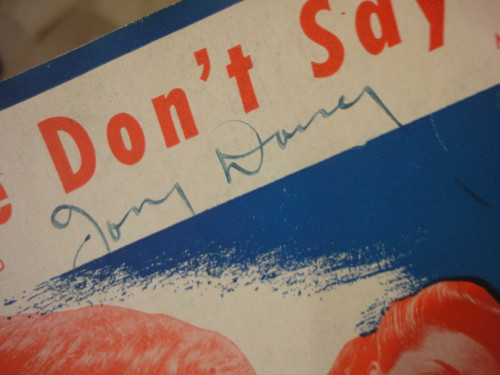