This item is a 7" X 9 1/2",black and white photo of Kirk Douglas and Elizabeth Montgomery in a scene from the 1985 Movie-"Amos". The photo has an original typed and dated byline on CBS stationery from 1986 explaining the photo and giving times of broadcast.Stars Kirk Douglas and Elizabeth Montgomery manage to rise above the melodramatic trappings of Amos. Douglas plays the title character, a fiercely independent senior-citizen baseball coach, forced to live in a retirement home after an auto accident. During his stay, Amos conducts a battle of wills with overbearing head nurse Daisy Dawes (Montgomery). This Cuckoo's Nest-derived setup has an added wrinkle: Amos suspects, quite rightly as it turns out, that Dawes has been systematically murdering her more troublesome charges. Made for TV by Douglas' own Bryna Productions, Amos first aired September 29, 1985 The photo has been autographed on the front by Kirk Douglas and Elizabeth Montgomery.....CONDITION OF BYLINE,PHOTO AND AUTOGRAPHS IS VERY GOOD...................... 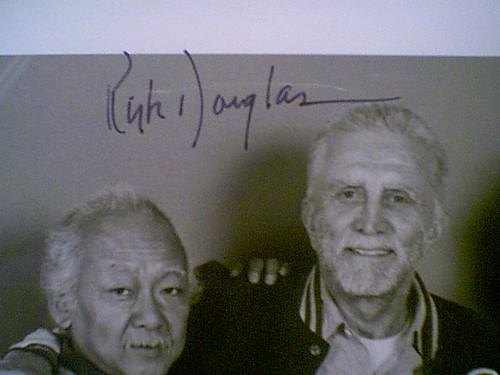