Jimmy Dorsey-"Green Eyes"-1941-Southern Music-sheet music. This sheet music was performed by Jimmy Dorsey and he is featyred on the front cover of the sheet music in a vintage photo.Dorsey, Jimmy (James Francis Dorsey), 1904–57, and his brother Tommy Dorsey(Thomas Francis Dorsey, Jr.), 1905–1956, both b. Shenandoah, Pa., American jazz musicians and bandleaders during the Big Band era. Jimmy Dorsey played the clarinet and alto saxophone, his brother the trombone. Toward the beginning of their careers in the late 1920s both were part of the Paul Whiteman Orchestra, and by the early 1930s both were successful pick-up and studio musicians. The two briefly had two bands together, the swing group of 1933–35 and another from 1953–56. Most of the time, however, each had his own band—Jimmy's a dance-oriented group and Tommy's more of a hot and sweet jazz ensemble that for awhile (1939–42) featured Frank Sinatra as a soloist. The Dorsey bands were popular Big Band era (late 1930s to early 50s). Dorsey bands were featured in several Hollywood movies, and the brothers starred in a fictionalized film biography, The Fabulous Dorseys (1947).The sheet music has been autographed on the front cover by Jimmy Dorsey with a fountain pen in orange.......BOTH SHEET MUSIC AND AUTOGRAPH ARE IN VERY GOOD CONDITION.................... 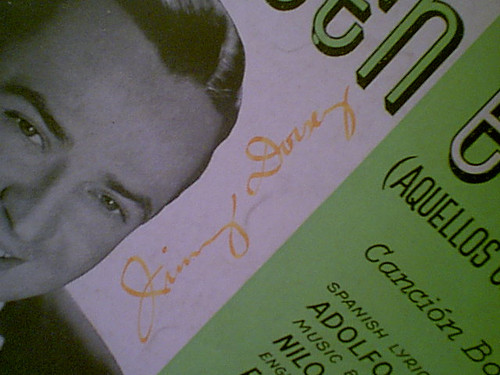