This item is a 10" X 14",black and white lithograph photo of model Yamila Diaz-Rahi.Yamila Díaz-Rahi (usually spelled without the diacritic mark in her modeling work; born March 9, 1976) is an Argentine model. She resides in Clinton Hill, Brooklyn.After working in Milan for a few years, she was featured in 1999 in the Sports Illustrated Swimsuit Issue, and made the cover of the magazine first in 2002 and again in 2006. On the 2006 cover, she appears with several other models for an "All-Stars" special.Diaz-Rahi has also appeared on the cover of magazines such as GQ, Glamour, Maxim, Elle, Shape.She has appeared in the Victoria's Secret catalog, and in advertisements for bebe, Ungaro's Fleur de Diva perfume, Replay jeans, and other products.She was the first Latin spokesmodel in CoverGirl history. Diaz-Rahi also starred in the 1999 Italian film Il pesce innamorato.The lithograph photo has been autographed on the front by Yamila Diaz-Rahi..............BOTH PHOTO AND AUTOGRAPH ARE N VERY GOOD CONDITION. 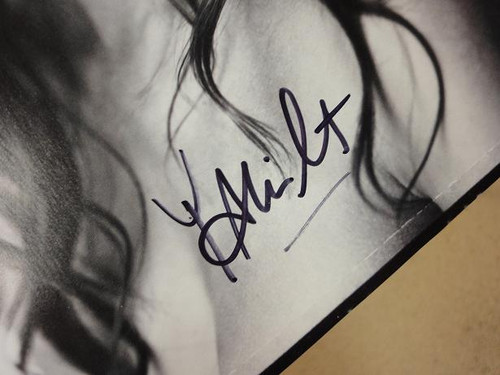