"The Three Caballeros"-1944-Harris Pub-sheet music. Walter Elias Disney (December 5, 1901  December 15, 1966) was an American entrepreneur, animator, writer, voice actor and film producer. A pioneer of the American animation industry, he introduced several developments in the production of cartoons. As a film producer, Disney holds the record for most Academy Awards earned by an individual, having won 22 Oscars from 59 nominations. He was presented with two Golden Globe Special Achievement Awards and an Emmy Award, among other honors. Several of his films are included in the National Film Registry by the Library of Congress............The Three Caballeros is a 1944 American live-action animated musical package film produced by Walt Disney and released by RKO Radio Pictures. The film premiered in Mexico City on December 21, 1944. It was released in the United States on February 3, 1945 and in the UK that March. The seventh Disney animated feature film, the film plots an adventure through parts of Latin America, combining live-action and animation. This is the second of the six package films released by Walt Disney Productions in the 1940s, following Saludos Amigos (1942). It was also the first feature-length film to incorporate traditional animation with live-action actors.The film is plotted as a series of self-contained segments, strung together by the device of Donald Duck opening birthday gifts from his Latin American friends. Several Latin American stars of the period appear, including singers Aurora Miranda (sister of Carmen Miranda) and Dora Luz, as well as singer and dancer Carmen Molina.The film was produced as part of the studio's good will message for Latin America. The film stars Donald Duck, who in the course of the film is joined by old friend José Carioca, the cigar-smoking parrot from Saludos Amigos, who represents Brazil, and later becomes friends with a pistol-packing rooster named Panchito Pistoles, who represents Mexico. The sheet music has been autographed on the front cover by Walt Disney with a fountain pen in blue.....................BOTH SHEET MUSIC AND AUTOGRAPH ARE IN VERY GOOD CONDITION. 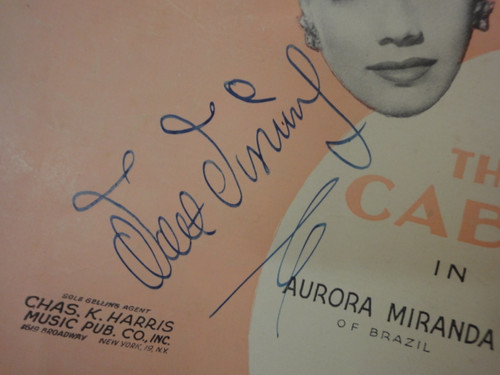