Tony DiTerlizzi and Holly Black-"Beyond The Spiderwick Chronicles The Nixie's Song"-2007-Simon & Schuster-4 1/2" X 6 1/2"-160 pages-Hardcover Book-Illustrated-Signed By Tony DiTerlizzi and Holly Black.Tony M. DiTerlizzi (born September 6, 1969) is an American fantasy artist, children's book creator, and motion picture producer.DiTerlizzi created The Spiderwick Chronicles series with Holly Black, and was an executive producer on the 2008 film adaptation of the series. He won a Caldecott Honor Medal for his adaptation of The Spider and the Fly. In the gaming industry, he best known for his work in the collectible card game Magic: The Gathering and on the Planescape product line for the Dungeons & Dragons role-playing game.The book has been autographed on the title page by Tony DiTerlizzi and Holly Black.....BOTH BOOK AND AUTOGRAPHS ARE IN VERY GOOD CONDITION. 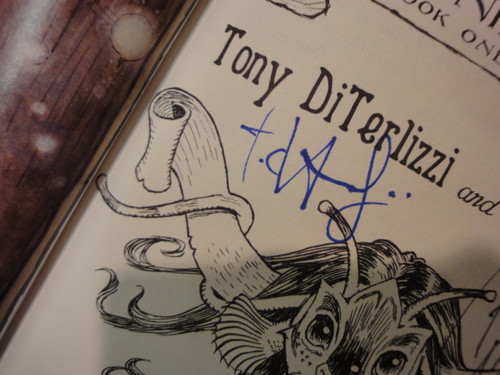