Rolling Stone Magazine-November 25,1982-Issure No. 383-88 pages. This vintage Rolling Stone Magazine-which originally sold for $1.50-features a color cover photo of actor Matt Dillon plus an article with photos.Matt Dillon was a teen screen idol in the 1980s who became a versatile character actor, earning an Oscar nomination for his performance in Paul Haggis's Crash (2004). Dillon got his start in 1979's Over the Edge, the first of many bad boy roles that brought out the usual comparisons to James Dean and young Marlon Brando. His square-jawed good looks and curled-lip attitude served him well in the film adaptations of S.E. Hinton's novels, The Outsiders and Rumble Fish (1983, both directed by Francis Ford Coppola), but he broke from the teen-rebel mold in 1984's The Flamingo Kid and proved his ability to do romantic comedy. Out of teen idol status, he starred in Target (1985, with Gene Hackman) and The Big Town (1987, with Diane Lane), and earned critical praise for playing a lowlife in Gus Van Sant's Drugstore Cowboy (1989). Since then Dillon has been a stand-out in supporting roles, in dramas including To Die For (1995, starring Nicole Kidman) and Wild Things (1998), and in the comedies In & Out (1997) and There's Something About Mary (1998, starring Dillon's then-girlfriend, Cameron Diaz).The Rolling Stone has been autographed on the front cover by Matt Dillon.........BOTH MAGAZINE AND AUTOGRAPH ARE IN VERY GOOD CONDITION. 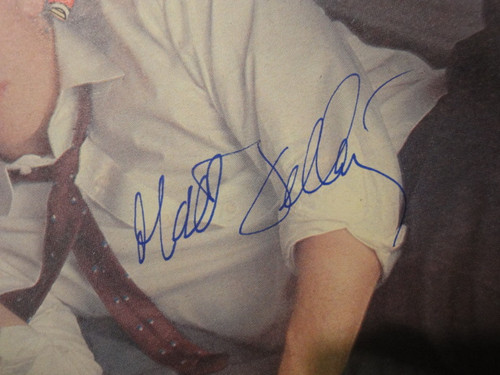