This item is an 8" X 10 1/2", black and white photo of actress Marlene Dietrich in a scene from one of her movies. Marlene Dietrich was a film actress and cabaret singer from Berlin who became a Hollywood star after starring in Josef von Sternberg's film The Blue Angel (1930). The film featured "Falling in Love Again (I Can't Help It"), a signature song she performed internationally until the 1970s. All angles and androgyny, Marlene Dietrich was a sex symbol and fashion icon almost from the first moment she she appeared in German films in the 1920s. As an actress she is best known for her roles in the von Sternberg movies Shanghai Express (1932), Blonde Venus (1932) and The Scarlet Empress (1934). In Hollywood her best-known roles were in the western comedy Destry Rides Again (1939, featuring her other well-known song, "The Boys in the Back Room"), the courtroom drama Witness for the Prosecution (1957) and the Orson Welles thriller Touch of Evil (1958). As a singer she was known for cabaret songs sung in a deep, sultry voice, for her support of U.S. troops during World War II and for her popularity in the 1950s in London and Las Vegas. The photo has been autographed on the front by Marlene Dietrich with a fountain pen in blue................BOTH PHOTO AND AUTOGRAPH ARE IN VERY GOOD CONDITION. 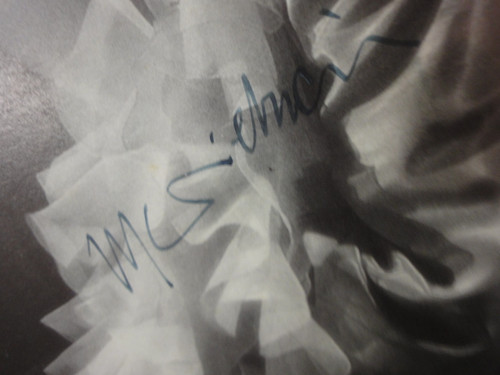