Diana Dors(Columbia CL 1436 DJ)-"Swinging Dors"-LP. This rare LP was released in 1960 and features a great color cover photo of Diana Dors. She is also featured on the back cover. Tracks include-The Gentleman Is A Dope,That's How It Is,Come BY Sunday,Imagination,April Heart,Point Of No Return,Roller Coaster Blues,Let There Be Love,Tired Of Love,Namely You,Crazy He Calls Me,In Love For The Very First Time.Diana Dors (October 23, 1931  May 4, 1984) was an English actress and sex symbol. She was born Diana Mary Fluck in Swindon, England. She was considered the English equivalent of the blonde bombshells of Hollywood. She also had significant acting ability, which was destined never to be fully utilised (most of her later work is made up of sex-themed comedies that featured scenes near to soft-core pornography). Her success was such that, aged 20, she was the youngest registered owner of a Rolls Royce in the UK. According to film buffs, her best work as an actress may have been when she played a murderess in the 1956 film Yield to the Night. She was also willing to play repulsive characters in such films as The Amazing Mr. Blunden and Timon of Athens. Dors never had quite the same following in the U.S., but recently has made a comeback due to her films having been shown on classic movie channels such as Turner Classic Movies. She also worked under the name of Diana d'Ors. During the summer of 1961, she filmed an episode of The Alfred Hitchcock Show (based on Robert Bloch's story "The Sorcerer's Apprentice", which co-starred Brandon De Wilde) which was so grisly that it was barred from airing and not released for many decades. The LP has been autographed on the front cover by Diana Dors in black fountain pen.........CONDITION OF VINYL,COVER AND AUTOGRAPH IS VG PLUS..................... 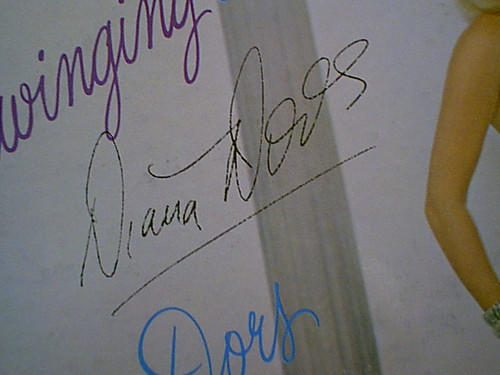