Look Magazine-October 11,1938-55 pages. This vintage Look Magazine-which originally sold for ten cents-features a color cover photo of the Dionne Quintuplets plus and article with photos.The Dionne Quintuplets (born May 28, 1934) are the first quintuplets known to survive their infancy. The sisters were born just outside Callander, Ontario, near the village of Corbeil. The Dionne girls were born two months premature. After four months with their family, they were made wards of the King for the next nine years under the Dionne Quintuplets' Guardianship Act, 1935. The government and those around them began to profit by making them a significant tourist attraction in Ontario. The identical quintuplet sisters were (in order of birth): Yvonne Édouilda Marie Dionne  died June 23, 2001, age 67, of cancer Annette Lillianne Marie Dionne (Allard)  age 79 as of June 2013 Cécile Marie Émilda Dionne (Langlois)  age 79 as of June 2013 Émilie Marie Jeanne Dionne  died August 6, 1954, age 20, of accidental suffocation during an epileptic seizure at her convent Marie Reine Alma Dionne (Houle)  died February 27, 1970, age 35, of an apparent blood clot of the brain in Montreal The Look Magazine has been autographed on the front cover by Cecile Dionne with a fountain pen in brown..........BOTH MAGAZINE AND AUTOGRAPH ARE IN VERY GOOD CONDITION FOR ITS AGE WITH SOME WEAR. 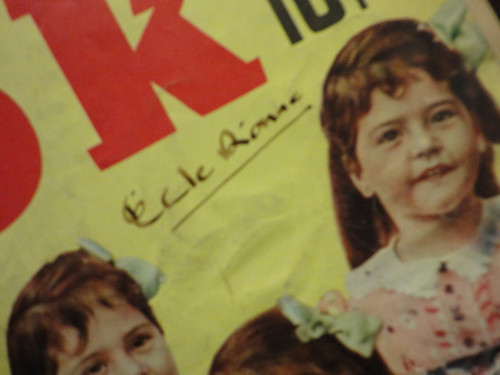