This item is an 8" X 10",color photo of actress Cameron Diaz.An athletic blonde with wide-set blue eyes, Cameron Diaz made a conspicuous movie debut opposite Jim Carrey in the wacky 1994 fantasy The Mask. Then she became a superstar by appearing in more than a dozen movies in just six years. In both independent and mainstream movies, Diaz played hot babes (She's the One, 1996), nice girls (There's Something About Mary, 1998), and even frumpy, neurotic types (Being John Malkovich, 1999). There's Something About Mary was a particular hit for Diaz, a raucous comedy featuring her as the beautiful and kindhearted object of desire for an eternally clumsy Ben Stiller. Her other films include Charlie's Angels (2000) and Charlie's Angels: Full Throttle (2003, both with Drew Barrymore and Lucy Liu), Martin Scorsese's Gangs of New York (2002, with Leonardo DiCaprio and Daniel Day-Lewis) and the CGI comedy series Shrek (2001-07, with Mike Myers). Diaz then took a break from the movies to appear on MTV in her own non-fiction adventure series, Trippin'. She returned to the big screen in the 2006 romantic comedy The Holiday, co-starring Jude Law, Kate Winslet and Jack Black, and also co-starred in What Happens in Vegas (2008, with Ashton Kutcher) and My Sister's Keeper (2009, starring Abigail Breslin).The color photo has been autographed on the front by Cameron Diaz....................BOTH PHOTO AND AUTOGRAPH IS IN VERY GOOD CONDITION..................... 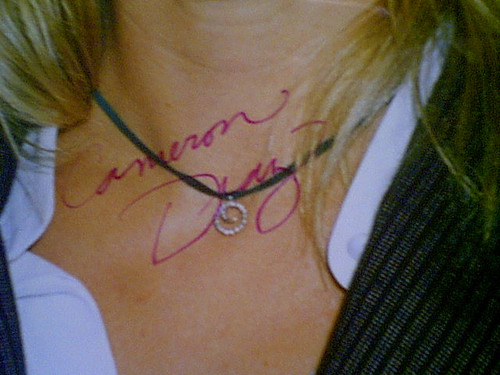