This item is an 8 1/2" X 11",black and white lithograph photo of musician Bo Diddley.Bo Diddley was born in Mississippi and raised in Chicago, where he was exposed to music and the blues. After studying violin and trombone, he took up the electric guitar. Diddley's flamboyance, square (often homemade) guitars and distinctive backbeat (sometimes described as "shave-and-a-hair-cut") earned him a record contract with Chess Records, and in 1955 he had his first hit with the two-sided "Bo Diddley/I'm A Man." Although he had several hits in the late 1950s and early 1960s, and appeared on TV with Dick Clark and Ed Sullivan, Diddley's aggressive beat, suggestive lyrics and raw performances ended up making him more influential than rich and famous. Still, he continued performing into the 21st century, and was recognized as an influence on artists ranging from Buddy Holly to The Rolling Stones. He was inducted into the Rock 'n Roll Hall of Fame in 1987.The lithograph photo has been autographed on the front by Bo Diddley................BOTH PHOTO AND AUTOGRAPH ARE IN VERY GOOD CONDITION. 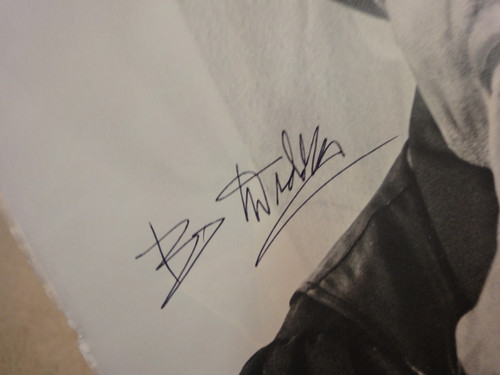