This item is an 8" X 10",black and white photo of Vittorio De Sica in a scene from the 1952 movie-"Times Gone By".An all-star cast graces this Italian "omnibus" feature. The film consists of eight short stories, each based on nostalgic literary efforts. Linking the various stories is bookseller Aldo Fabrizi, who passes the time by reading the works dramatized herein. In "The Excelsior Ball," dancer Alba Arnova arouses the libido of several observers. In "Less Than a Day," a three-hour train delay wreaks havoc on the romance between Arnova and Andrea Checchi. In "Sardinian Drummer Boy," the title character (Enzo Cerusico) becomes an unexpected hero on the battlefield. In "Matter of Interest," two farmers (Arnoldo Foa and Folco Lulli) quarrel over a compost pile. In "The Idyll," two very young people (Maurizio Di Nardo and Geraldina Pariniello) fall in love. "Potpourri of Songs" delivers on its title through the musical versatility of Barbara Florian and Elio Pandolfi. "The Trial of Frine" finds accused murderess Gina Lollobrigida being defended by colorful lawyer Vittorio De Sica. And in "The Trap," an accusatory husband (Amedeo Nazzari) drives his far-from-innocent wife (Elis Cegani) into an act of extreme desperation. Also known as In Olden Days, Altri Tempi was distributed worldwide by RKO Radio.The photo has been autographed on the front by Vittorio De Sica with a fountain pen in black...............BOTH PHOTO AND AUTOGRAPH IS EXCELLENT............... 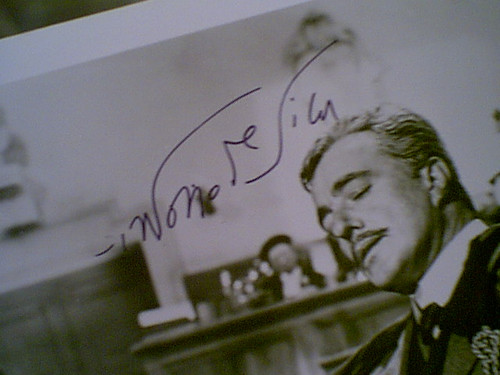