Major Alexander P. De Seversky-"Victory Through Air Power"- 1943-Garden City Pub-5 1/2" X 8"-354 pages-Hardcover Book-With Photos-Signed By Author.Alexander Nikolaievich Prokofiev de Seversky (also Prokofiev-Seversky or DeSeversky), (June 7, 1894  August 24, 1974) was a Russian-American aviation pioneer, inventor, and influential advocate of strategic air power.He was the author of the influential 1942 book, Victory Through Air Power, which Disney adapted into a motion picture. Seversky argued for the immediate development of long-range bombers, specifically intercontinental bombers capable of directly striking Germany and Japan from the U.S. without refueling. He urged the shift of manufacturing resources away from traditional land- and sea-based armaments and air-support aircraft and toward these bombers. He argued that existing U.S. strategy was futile and could not achieve victory, due to the disparity between the long supply lines needed by U.S. forces and the excellent interior communications within Germany and Japan. No matter how many machines and planes the U.S. threw at the Axis powers, they could withstand the assault by shrinking their defensive perimeter and concentrating their power. Seversky argued that direct bomber attacks from U.S.-based aircraft were the only way of administering a knockout blow. He acknowledged that shifting priorities to strategic air would reduce the strength of traditional forces, but argued that this would require only a temporary yielding of ground. The book has been autographed on the title page by Alexander De Seversky with a fountain pen in blue................BOTH BOOK AND AUTOGRAPH ARE IN VERY GOOD CONDITION................. 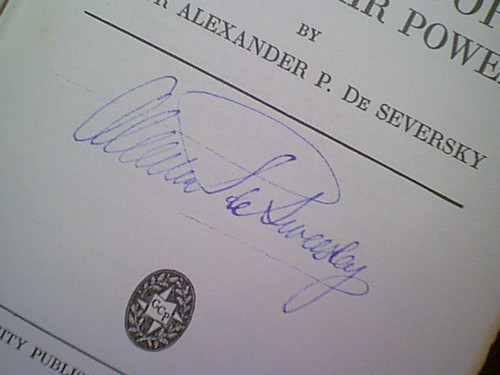