"Over Land And Over Sea"-Song Of The American Air Force-1937-Marks Music Corp-sheet music. This song was written and composed by Evelyn De Seversky and Alexander De Seversky. Alexander De Seversky is featured on the front cover of the sheet music in a vintage photo.Alexander Nikolaievich Prokofiev de Seversky (also Prokofiev-Seversky or DeSeversky), (June 7, 1894  August 24, 1974) was a Russian-American aviation pioneer, inventor, and influential advocate of strategic air power.Using the $50,000 from the sale of his bombsight to the U. S. Government, Seversky founded the Seversky Aero Corporation in 1923. Concentrating on making aircraft parts and instruments, the small company was unable to survive the stock market crash of 1929. On February 16, 1931, with the backing of Wall Street millionaire Edward Moore and other investors, he resurrected the enterprise as the new Seversky Aircraft Corporation in Long Island, New York. [6]Moving into the former EDO Corporation's float plane factory at College Point, Long Island, Seversky's patents were the primary assets of the new company. Resolved to invest in research and design rather than relying on licence-manufacturing, many of Seversky Aircraft's designers were Russian and Georgian engineers whom Seversky had rescued from Stalin's purges by bringing them to the United States, including Chief Engineer Michael Gregor and Alexander Kartveli. Along with Seversky, the designers embarked on an advanced all-metal, multi-place monoplane amphibian, the SEV-3. This ground-breaking design would go on to set numerous speed records 19331939 National Air Races, often piloted by Seversky himself, who was the company's greatest "pitchman". On September 15, 1935, flying at a speed just over 230 mph, Seversky set a world speed record for piston-engine amphibious airplanes. Seversky also set a transcontinental speed record in 1938.The sheet music has been autographed on the front by Alexander De Seversky with a fountain pen in black......BOTH SHEET MUSIC AND AUTOGRAPH ARE IN AVERAGE CONDITION.... 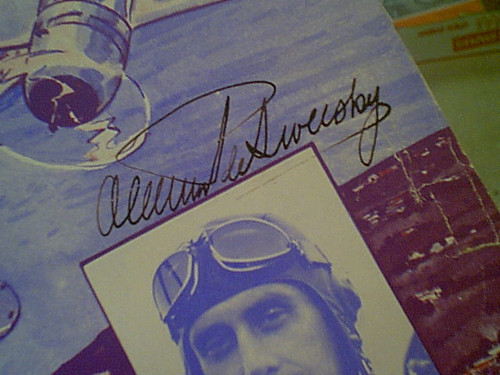