This item is a 9" X 13", black and white photo of actor Johhny Depp. Before he was a big-time, eccentric movie star, Johnny Depp was famous as a heartthrob cop on the teenybopper drama 21 Jump Street (1987-1990). He gave up TV for the movies, playing the fantastical title character in Tim Burton's Edward Scissorhands (1990) and winning critical acclaim in What's Eating Gilbert Grape (1993, co-starring Leonardo DiCaprio). Depp became known as a handsome and thoughtful actor who craved variety; in the 1990s he took a wide range of roles, from the lead in Don Juan DeMarco (1995, with Faye Dunaway and Marlon Brando) to Ichabod Crane in Burton's Sleepy Hollow (1999, with Christina Ricci). In 2001 he played real-life cocaine trafficker George Jung in the movie Blow (co-starring with Penelope Cruz), and he became a box office superstar as the comically swaggering pirate Captain Jack Sparrow in Pirates of the Caribbean: The Curse of the Black Pearl (co-starring Orlando Bloom) and its sequels (2003-07). The pirate role earned him an Oscar nomination in 2004, and he followed up with another nomination for playing J.M. Barrie (the creator of Peter Pan) in Finding Neverland (2004). As if he hadn't wowed audiences enough, Depp sang in Burton's 2007 film Sweeney Todd: The Demon Barber of Fleet Street and earned a third Oscar nomination for best actor. By 2012 Depp was the highest paid movie star in the country, but then came a string of bad movies that did poorly at the box office. Even the fifth installment in the Pirates series, Dead Men Tell No Tales (2017) received a tepid response. Off screen, Depp's reputation was going in the same direction as his movie career, and headlines about him were more about domestic violence, drug abuse, weird behavior and the squandering of his fortune. Depp's acrimonious divorce from Amber Heard (they married in 2015 and divorced in 2017) led to a host of legal imbroglios that dominated news about him from 2016-2022. The photo has been autographed by Johnny Depp.............BOTH PHOTO AND AUTOGRAPH ARE IN EXCELLENT CONDITION. 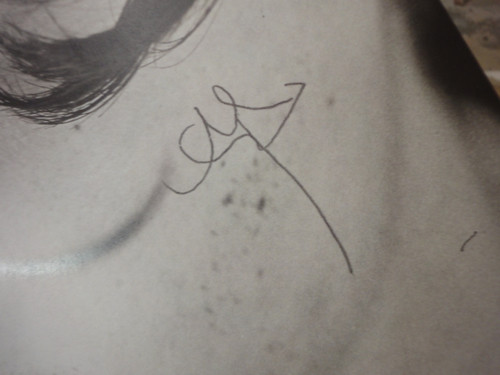