Original Soundtrack-"Taxi Driver"(Arista 4079)-LP. This soundtrack LP features the 1976 Martin Scorsese Movie-"Taxi Driver". The movie stars Robert De Niro,Cybill Shepherd,Harvey Keitel and Jody Foster and they are featured on the front and back covers in original color scenes.Written by Paul Schrader, Taxi Driver is an homage to and reworking of cinematic influences, a study of individual psychosis, and an acute diagnosis of the latently violent, media-fixated Vietnam era. Scorsese and Schrader structure Travis' mission to save Iris as a film noir version of John Ford's late Western The Searchers (1956), aligning Travis with a mythology of American heroism while exposing that myth's obsessively violent underpinnings. Yet Travis' military record and assassination attempt, as well as Palatine's political platitudes, also ground Taxi Driver in its historical moment of American in the 1970s. Employing such techniques as Godardian jump cuts and ellipses, expressive camera moves and angles, and garish colors, all punctuated by Bernard Herrmann's eerie final score (finished the day he died), Scorsese presents a Manhattan skewed through Travis' point-of-view, where De Niro's now-famous "You talkin' to me" improv becomes one more sign of Travis' madness. Shot during a New York summer heat wave and garbage strike, Taxi Driver got into trouble with the MPAA for its violence. Scorsese desaturated the color in the final shoot-out and got an R, and Taxi Driver surprised its unenthusiastic studio by becoming a box-office hit. Released in the Bicentennial year, after Vietnam, Watergate, and attention-getting attempts on President Ford's life, Taxi Driver's intense portrait of a man and a society unhinged spoke resonantly to the mid-'70s audience  too resonantly in the case of attempted Reagan assassin and Foster fan John W. Hinckley. Taxi Driver went on to win the Palme d'Or at the Cannes Film Festival, but it lost the Best Picture Oscar to the more comforting Rocky. Anchored by De Niro's disturbing embodiment of "God's lonely man," Taxi Driver remains a striking milestone of both Scorsese's career and 1970s Hollywood.The LP has been autographed on the back cover by Robert De Niro,Cybill Shepherd,Harvey Keitel and Jody Foster.........CONDITION OF VINYL,COVER AND AUTOGRAPHS IS VG.FRONT COVER HAS SOME WEAR........................... 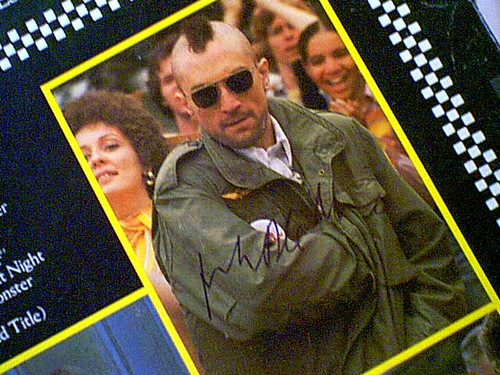