"Ramona"-1927-Leo Feist-sheet music. This song is featured in the 1928-United Artists silent movie-"Ramona". The movie stars Dolores Del Rio and she is featured on the front cover of the sheet music in an original scene. Dolores del Río (August 3, 1905  April 11, 1983) was a Mexican film actress. She was a star of Hollywood films during the silent era and became an important actress in Mexican films later in her life.She was selected as one of the WAMPAS Baby Stars in 1926 (along with fellow newcomers Joan Crawford, Fay Wray, Janet Gaynor, and Mary Astor), but initially overcame prejudice that same year in one of that year's biggest screen successes, What Price Glory. She came to be admired as one of the most beautiful women on screen, and her career flourished until the end of the silent era with successful films such as Resurrection, Ramona, and Evangeline (1929). In 1930, she married Cedric Gibbons, one of MGM's leading art directors and production designers. With the advent of talkies she was usually relegated to exotic and unimportant roles, but scored successes with Bird of Paradise (1932) Flying Down to Rio (the film that launched the careers of Fred Astaire and Ginger Rogers) (1933) and Madame DuBarry (1934), Wonder Bar (1934) and In Caliente (1935). Divorced from Gibbons in 1941, Orson Welles fell madly in love with her although he was 10 years younger. The affair with Orson Welles was reported to have been the cause of her divorce from Gibbons in 1941, but that is far from certain, in particular considering the Hollywood reputation of Gibbons' sexual orientation. She collaborated with Welles in the film, Journey Into Fear (1942). She returned to Mexico in 1942. She was soon approached by director Emilio Fernández, and she began making Spanish-language films that brought her great success in Mexico and Hispanic America over the next twenty years. Among her most successful films were Flor Silvestre (1943) Maria Candelaria (1943), Bugambilia, Las Abandonadas (1944), The Fugitive (1947, directed by John Ford), La Otra, La Malquerida (1949), El Niño y la Niebla (1953), La Cucaracha (1958). She was nominated for Mexico's Silver Ariel Award many times, winning four awards for her performances. The sheet music has been autographed on the front cover by Dolores Del Rio in red fountain pen............BOTH SHEET MUSIC AND AUTOGRAPH ARE IN VERY GOOD CONDITION..................... 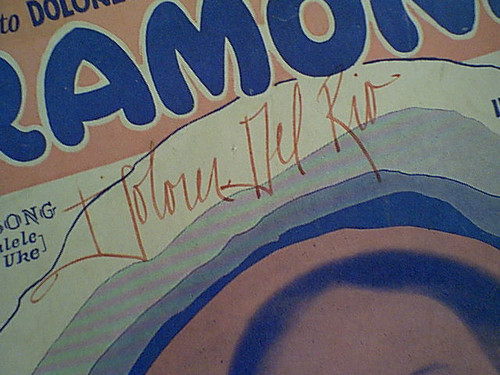