THIS IS AN AUTHENTICALLY AUTOGRAPHED SEALED LD BY JOHNNY DEPP AND WINONA RYDER... JOHNNY DEPP/WINONA RYDER-EDWARD SCISSORHANDS-LASERDISC-FOX VIDEO-STEREO EXTENDED PLAY-DIGITAL SOUND-LD IS STILL SEALED IN ORIGINAL SHRINK WRAP WITH SMALL PIECE REMOVED FROM FRONT PHOTO COVER FOR AUTOGRAPHS BY JOHNNY DEPP AND WINONA RYDER-CONDITION OF THE AUTOGRAPHS IS EXCELLENT. Edward Scissorhands is a 1990 American fantasy film, written by Tim Burton and Caroline Thompson, and directed by Burton. The film features Johnny Depp as the eponymous Edward, Winona Ryder, Dianne Weist and Anthony Michael Hall. The plot revolves around a man named Edward; the creation of a scientist, who is adopted into an American family in a brightly-colored suburban neighborhood. The film is a comedy-drama set in an exaggerated and highly stereotypical vision of American suburbia and the typical families that inhabit it. It intentionally combines clichés and styles from both the 1950s, early 1960s and the late 1980s. The concept, and many of the motifs of Edward Scissorhands can be compared to the Gothic novel Frankenstein by Mary Shelley and the 1931 film of the same name. 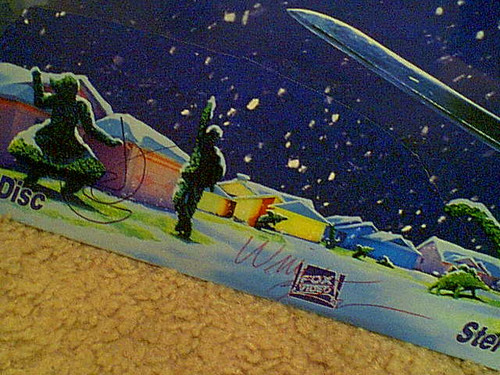