Creem Magazine-January 1976-82 pages. This vintage Creem Magazine-which originally sold for $1.00-features a color cover of John Denver plus an article with photos.Henry John Deutschendorf, Jr. (December 31, 1943 – October 12, 1997), known professionally as John Denver, was an American singer, songwriter, actor, activist, and humanitarian. He was one of the most popular acoustic artists of the 1970s.[1] After traveling and living in numerous locations while growing up in his military family, Denver began his music career in folk music groups in the late 1960s. His greatest commercial success was as a solo singer, starting in the 1970s. Throughout his life, Denver recorded and released approximately 300 songs, about 200 of which he composed.The magazine has been autographed on the front cover by John Denver...............BOTH MAGAZINE AND AUTOGRAPH ARE IN VERY GOOD CONDITION. 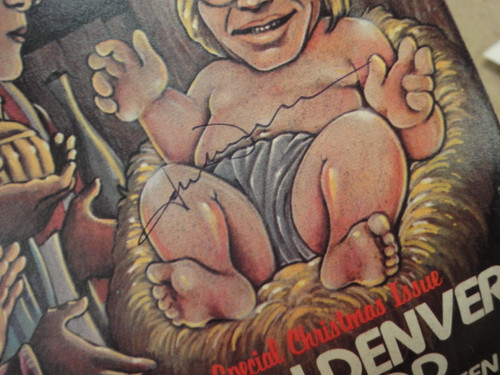