This item is a 4 1/2" X 8 1/2" receipt from Jack Dempsey's Broadway Restaurant And Bar.Jack Dempsey's Broadway Restaurant, known popularly as Jack Dempsey's, was a restaurant located on Broadway between 49th and 50th streets in Manhattan, New York. Owned by world Heavyweight boxing champion, Jack Dempsey, it was considered by many as an American institution. The restaurant originally opened for business as Jack Dempsey's Restaurant on Eighth Avenue and 50th Street, directly across from the third Madison Square Garden, in 1935. Most nights would find Dempsey's famous proprietor on hand to greet guests, sign autographs, pose for pictures, and hold court with people from all walks of life.......William Harrison "Jack" Dempsey ("The Manassa Mauler") (June 24, 1895  May 31, 1983) was an American professional boxer and cultural icon of the 1920s. He held the World Heavyweight Championship from 1919 to 1926. Dempsey's aggressive style and exceptional punching power made him one of the most popular boxers in history. Many of his fights set financial and attendance records, including the first million dollar gate. He is listed #10 on The Ring's list of all-time heavyweights and #7 among its Top 100 Greatest Punchers. In 1950, the Associated Press voted Dempsey as the greatest fighter of the past 50 years. He is a member of the International Boxing Hall of Fame; he was inducted into The Ring magazine's Boxing Hall of Fame in 1951. The receipt has been autographed on the front by Jack Dempsey with a fountain pen in blue...........BOTH RECEIPT AND AUTOGRAPH ARE IN VERY GOOD CONDITION. 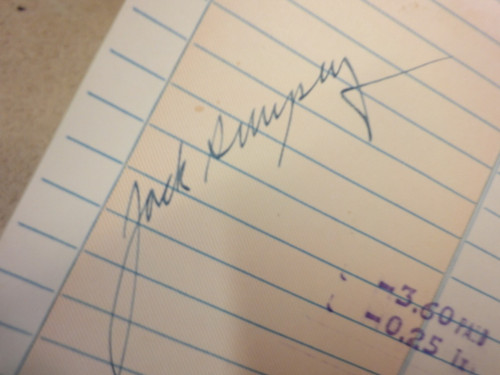