This item is a 4" X 5",50 page,black and white booklet. The booklet was distributed by "Kik"-"America's King Thirst Quencher" which was five cents for a 12 Oz Bottle.The booklet-"Exercising With Jack Dempsey" features a photo of Jack on the front cover. The booklet features 12 Boxing Lessons with diagrams,exercises with diagrams,tips for staying healthy with a special place to keep your own health records.Dempsey, Jack (William Harrison Dempsey), 18951983, American boxer, b. Manassa, Colo. Dempsey, called the Manassa Mauler, emerged from fights on saloon floors near mining camps to become (1919) the world's heavyweight champion and one of the major sports figures of the 1920s. He sealed his slugging reputation in his first title fight by knocking down the gigantic champion, Jess Willard, seven times in the first three minutes. Dempsey held the crown until losing to Gene Tunney in 1926. In a rematch Dempsey knocked Tunney down in the seventh round, but failed to immediately return to his corner, thus allowing Tunney the benefit of a legendary 14-second long count. After retirement, he worked occasionally as a referee and spent nearly four decades as proprietor of a popular New York City restaurant.The booklet has been autographed on the front cover by Jack Dempsey with a fountain pen in black.........BOTH BOOKLET AND AUTOGRAPH ARE IN OKAY CONDITION................... 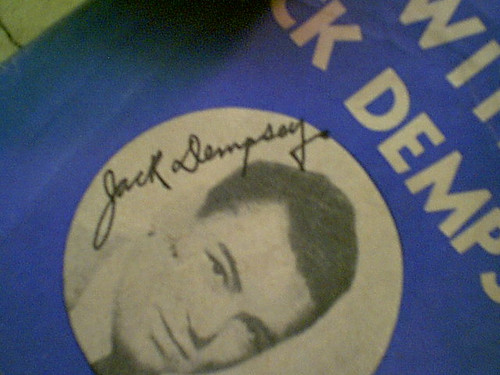