THIS IS AN AUTHENTICALLY AUTOGRAPHED LP BY BRUCE DERN... SILENT RUNNING-COMPOSED AND CONDUCTED BY PETER SCHICKELE-FEATURING REJOICE IN THE SUN, SILENT RUNNING-SUNG BY JOAN BAEZ(DECCA DL 7 9188)COVER IS SIGNED BY BRUCE DERN. LP HAS ORIGINAL INNER SLEEVE. CONDITION OF THE VINYL,COVER, AND AUTOGRAPH IS VG PLUS. Silent Running is a 1972 ecologically-themed science fiction film directed by Douglas Trumbull which depicts a future in which all plant life on Earth has been made extinct, except for a few specimens preserved in space in greenhouse domes. When orders come from Earth to jettison and destroy the domes, the ship's botanist (Bruce Dern) opts instead to send the last dome into deep space to save the remaining plants and animals. In addition to Dern, the film starred Cliff Potts, Ron Rifkin and Jesse Vint. The film was noted for Trumbull's creative use of scale models and other special effects. He had previously used groundbreaking special effects in the science fiction film 2001: A Space Odyssey. The film has since achieved a cult following among science fiction fans. The soundtrack contains two songs  "Silent Running" and "Rejoice in the Sun"  written by Peter Schickele and Diane Lampert and performed by Joan Baez. 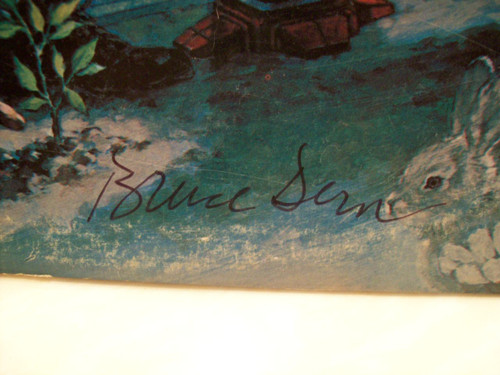