"The Cat"-1964-Hastings Music-sheet music. This song is featured in the 1964 MGM Movie-"Joy House". The movie stars Jane Fonda,Alain Delon and Lola Albright and they are featured on the front cover of the sheet music in original scenes.Alain Delon stars as Marc, a small-time swindler and Casanova who finds himself on the hit-list of an American gangster. He escapes the first attempt on his life in Monte Carlo and hides out serving as a chauffeur for the married Barbara (Lola Albright). Marc seems to have gotten into a bigger mess when he finds that Barbara's husband was murdered by her lover Vincent (Robert Oumansky), whom she is now hiding in her chateau. Barbara is planning to pass Marc off as her lover, hoping he will be knocked off by the authorities rather than Vincent. Attempting to save Marc  or just complicating matters  is Barbara's niece Melinda (Jane Fonda), who has fallen in love with Marc. If Marc plays his cards right, he may be able to get out of his uncomfortable predicament. Cinematographer Henri Decae also worked with Fonda on Roger Vadim's 1964 La Ronde  a film wherein Fonda was granted a great deal more exposure. This sheet music originally sold for seventy five cents. The sheet music has been autographed on the front cover by Alain Delon,Jane Fonda and Lola Albright.........BOTH SHEET MUSIC AND AUTOGRAPHS ARE IN EXCELLENT CONDITION.......... 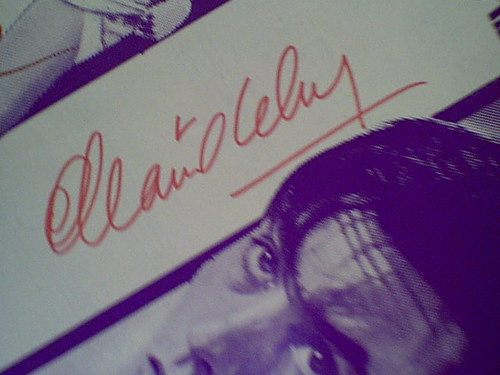