William Dargie-"On Painting A Portrait"-1957-The Artists Publishing Co. Ltd.-London-6 1/2" X 8 1/2"-72 pages-hardcover book-with jacket-with illustrations-Signed By Author.Sir William Alexander Dargie CBE (June 4, 1912  July 26, 2003) was an Australian painter, known especially for his portrait paintings. He holds the record for most Archibald Prize wins; eight. He was an official Australian War Artist during World War II.William Dargie was born in Footscray, Victoria, the first son of Andrew Dargie and Adelaide (nee Sargent). His younger brother Horrie Dargie was a noted Australian musician and harmonicist.When he was young he met important Australian artists such as Arthur Streeton and Tom Roberts. During World War II he served with the Australian Army in the Middle East, New Guinea, India and Burma. He was digging a trench in Tobruk, Libya, when he was informed that he had won the Archibald Prize in 1942.In December 1954 he painted Australia's official portrait of Queen Elizabeth, who posed for him at Buckingham Palace. He painted the Duke of Edinburgh in 1956.He painted official portraits of two Australian Prime Ministers: Sir Arthur Fadden and Sir John McEwen. Other famous Australians who sat for him included such names as Sir Charles Kingsford Smith and Margaret Court.He held positions on several gallery boards, serving on the Commonwealth Art Advisory Board for twenty years. Between 1946 and 1953 he was head of the Victorian Art School at the National Gallery of Victoria.While he is best known for his portraits, he also painted other works, such as smaller interior views, landscapes and still lifes.The book has been autographed on the title page by William Dargie with a fountain pen in blue..............BOTH BOOK AND AUTOGRAPH ARE IN VERY GOOD CONDITION.JACKET HAS A LITTLE WEAR........ 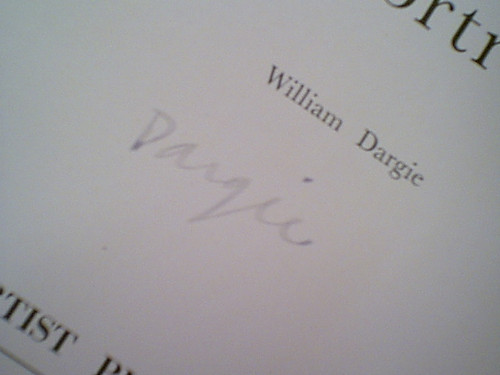