Miles Davis-"Musician"-May 1989-No. 127-98 pages. This vintage magazine which originally sold for $2.95-features a color cover photo of musician Miles Davis plus an article with photos. Davis, Miles, 1926–91, American jazz musician, b. Alton, Ill. Rising to prominence with the birth of modern jazz in the mid-1940s, when he was a sideman in Charlie Parker's bop quintet, Davis became a dominant force in jazz trumpet. He was influential in the development of cool jazz in 1949–50, led numerous outstanding small groups through the 1950s and 60s, and produced a successful blend of jazz and rock music in the 1970s and 80s. Davis's trumpet and flügelhorn styles were warmly lyrical and were marked by a brilliant use of mutes. He made many recordings, which reflect his stylistic changes; Kind of Blue (1959), a landmark of modal jazz, has been a best-seller since it was issued. The magazine has been autographed on the front cover by Miles Davis...................BOTH MAGAZINE AND AUTOGRAPH ARE IN VERY GOOD CONDITION. 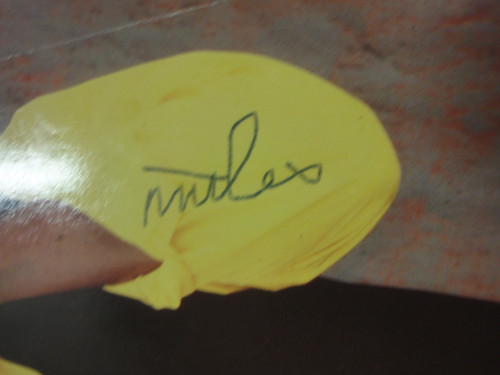