"Charlie And The Chocolate Factory"(Caedmon TC 1476)-Read BY Author Roald Dahl. This vintage LP was released in 1975 and fetaures a photo of Roald Dahl on the back cover.Quirky and outlandish tales like Charlie and the Chocolate Factory made Roald Dahl a popular children's author of the 20th century. His early career as a salesman for Shell Petroleum in Africa was interrupted by World War II; Dahl joined the Royal Air Force as a pilot, saw action, and ended up as a liaison in Washington, D.C. There he met the author C.S. Forester, who encouraged Dahl to write about his war experiences. Most of Dahl's early tales were short stories for adults, often alarmingly macabre and with O. Henry-style twists. In the 1960s he began to write children's books; his first, James and the Giant Peach, was published in 1961. Charlie and the Chocolate Factory, the tale of a poor urchin who wins a tour of the magical candy factory of Willy Wonka, was published in 1964. It became Dahl's best-known book and was made into a feature film in 1971 (starring Gene Wilder as Wonka and Peter Ostrum as Charlie) and again in 2005 (with Johnny Depp as Wonka and Freddie Highmore as Charlie). Dahl's many other books include Danny The Champion of the World (1975), The BFG (1982) and Matilda (1988. Dahl married the actress Patricia Neal in 1953; they were divorced in 1983, and he married Felicity Crossland the same year... The song "The Candy Man," popularized by Sammy Davis, Jr., was written for the film version of Charlie and the Chocolate Factory... The rock band Veruca Salt was named for an unpleasant little girl from the same story... Dahl scripted the 1967 James Bond film You Only Live Twice and co-wrote the 1968 film of another Ian Fleming book, Chitty Chitty Bang Bang.The LP has been autographed on the back cover by Roald Dahl with a fountain pen in brown..............CONDITION OF VINYL,COVER AND AUTOGRAPH ARE STRONG VG........... 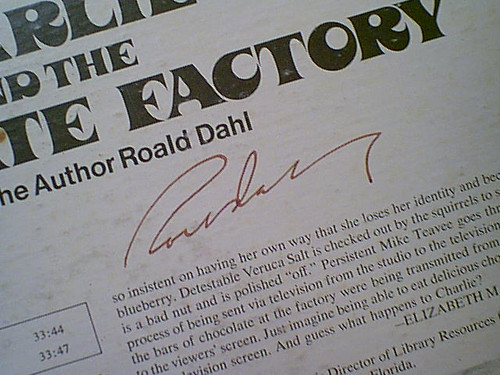