This item is an 8" X 10" color photo of actor Ted Danson in a scene from the television series-"Becker".  Edward Bridge Danson III (born December 29, 1947) is an American actor and producer who played the lead character Sam Malone on the NBC sitcom Cheers, Jack Holden in the films Three Men and a Baby and Three Men and a Little Lady, and Dr. John Becker on the CBS sitcom Becker. He also starred in the CBS dramas CSI: Crime Scene Investigation and CSI: Cyber as D.B. Russell.Additionally, he played a recurring role as a fictionalized version of himself on Larry David's HBO sitcom Curb Your Enthusiasm, starred alongside Glenn Close in legal drama Damages and was a regular on the HBO comedy series Bored to Death. In 2015 he starred as Hank Larsson in the second season of FX's black comedy-crime drama anthology Fargo. From 2016 to 2020, he played the afterlife architect Michael in the NBC sitcom The Good Place. He currently plays Neil Bremer in NBC's Mr. Mayor. The color photo has been autographed on the front by Ted Danson...................BOTH PHOTO AND AUTOGRAPH ARE IN EXCELLENT CONDITION. 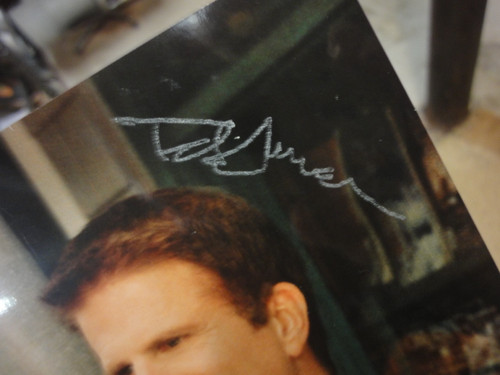