John Davidson-1975-9" X 12"-18 pages-concert program.Although he was the host of two of America's favorite shows, Hollywood Squares and That's Incredible!, John Davidson was first a singer and dancer on stage. His career soared when he took on these two shows but he is now performing on Broadway, his first love. John Davidson was born in Pittsburgh, the son of a minister. He made his Broadway debut in the 1964 production of Foxy, which also starred Bert Lahr, known for his performance as the Cowardly Lion in the 1939 MGM classic The Wizard of Oz. Television producer Bob Banner, who discovered such stars as Carol Burnett and Bob Newhart, was impressed with John Davidson's performance and molded him into a TV entertainer. Bob Banner instilled in John Davidson that being a TV personality meant not only adapting yourself to many different television roles but also knowing when to be yourself. He learned to be a singer, actor and a TV personality. In 1964 he appeared on the unsuccessful variety show The Entertainers. This was followed by appearances in several prime-time variety shows including Kraft Summer Music Hall and two versions of The John Davidson Show. It wasn't until 1980 when John Davidson became a household name when he hosted That's Incredible! The show lasted four years and was co-hosted by Cathy Lee Crosby. The concert program has been autographed on the front cover by John Davidson........BOTH CONCERT PROGRAM AND AUTOGRAPH ARE IN VERY GOOD CONDITION. 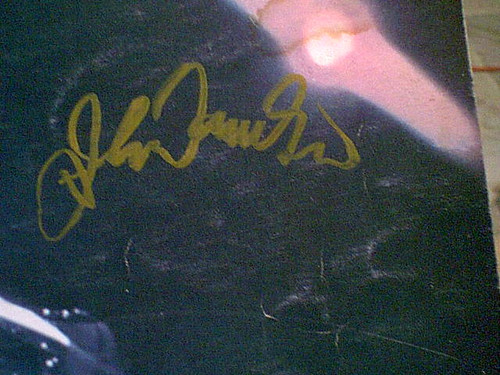