This item is an original press kit which features the 1986 Movie-"Wise Guys" starring Danny DeVito and Joe Piscopo. The press kit consists of an original 9" X 12" folder from MGM. The folder has 7-8" X 10",black and white photos of original scenes from the movie. This press kit was a promotional item and was not available for retail sale. It was only given out to movie theatre owners.The "wise guys" referred to in the title, Harry Valentini (Danny DeVito) and Moe Dickstein (Joe Piscopo), turn out to be not so wise after all in this crime-oriented comedy. Harry and Moe run the risk of certain death when they steal money from a Mafia don (Dan Hedaya) and then try to multiply their ill-gotten gains at the horse races. Naturally, they lose the bundle and the next thing they know they're running from hitmen and trying to come up with enough cash to pay back their debt. Wise Guys' blend of comedy and action represented something of a change of pace for director Brian DePalma, best known for his offbeat thrillers and Hitchcock homages.The press kit has been autographed on the front by Danny DeVito and Joe Piscopo............................CONDITION OF PRESS KIT,PHOTOS AND AUTOGRAPHS IS VERY GOOD............. 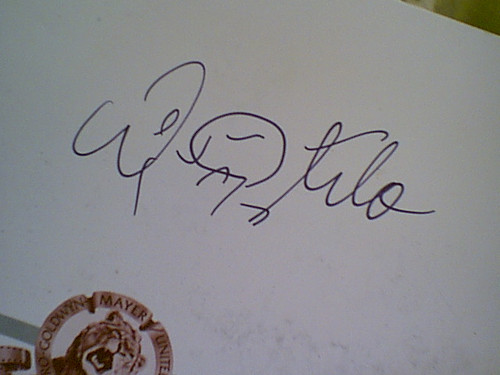