This item is a 7" X 10",color lithograph photo of a Japanese advertisement for the movie "Lincoln" starring Daniel Day-Lewis.Daniel Michael Blake Day-Lewis (born 29 April 1957) is an English actor with both British and Irish citizenship. Born and raised in London, he is the son of Poet Laureate Cecil Day-Lewis and actress Jill Balcon, and the son-in-law of American playwright Arthur Miller. Despite his traditional actor training at the Bristol Old Vic, he is considered to be a method actor, known for his constant devotion to and research of his roles. He often remains completely in character for the duration of the shooting schedules of his films, even to the point of adversely affecting his health. He is known as being one of the most selective actors in the film industry, having starred in only five films since 1998, with as many as five years between each role.The lithograph photo has been autographed on the front by Daniel Day-Lewis..............BOTH PHOTO AND AUTOGRAPH ARE IN VERY GOOD CONDITION. 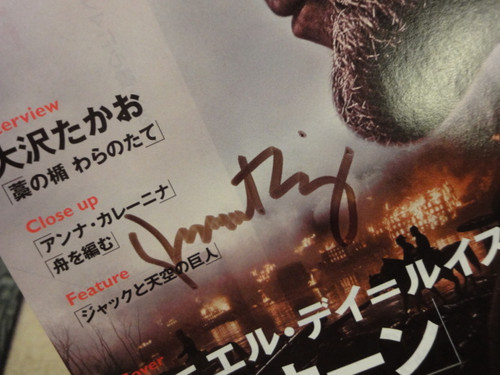