This item is an 8" X 10",black and white photo of actor Tony Curtis.Tony Curtis was a Hollywood icon in the mid-20th century, when he was the darkly handsome star of movies including The Sweet Smell of Success (1957, with Burt Lancaster) and the raucous cross-dressing comedy Some Like it Hot (1959, with Jack Lemmon and Marilyn Monroe). Curtis started out on the studio payroll, appearing in dramas and costumers until capturing a lead role in 1951's The Prince Who Was a Thief. He turned in reliable performances throughout the '50s (including a star turn as magician Harry Houdini in 1953's Houdini), building an onscreen persona that was part charming rogue and part earnest, sensitive hunk. Meanwhile, his marriage to actress Janet Leigh (1951-62) made him a favorite of fan magazines and gossip columns. In 1959 he earned an Oscar nomination for The Defiant Ones (1958, with Curtis handcuffed to Sidney Poitier), and in 1960 he co-starred with Kirk Douglas in the Roman Empire epic Spartacus. Curtis specialized in light comedies during the 1960s, including The Great Race (1965) and Arrivederci, Baby (1968, with Nancy Kwan), but his memorable turn as the killer in The Boston Strangler (1968, with Henry Fonda) reaffirmed his dramatic skills. Since then Curtis has worked sporadically in the movies and on television, including the feature films The Last Tycoon (1976) and Sextette (1978, with Mae West), and the TV cult favorite The Persuaders (1971, with Roger Moore).The photo has been autographed on the front by Tony Curtis..............BOTH PHOTO AND AUTOGRAPH ARE IN VERY GOOD CONDITION...................... 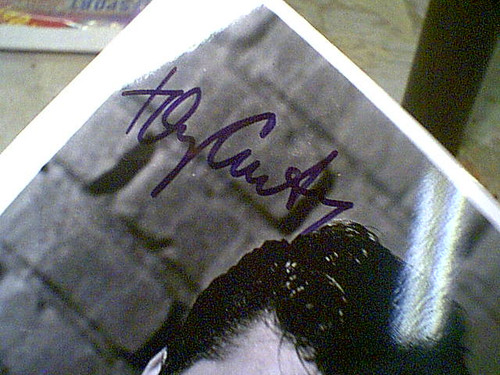