Screen Stories-February 1959-90 pages. This vintage Screen Stories Magazine-which originally sold for twenty five cents-features a color cover photo of Tony Curtis and Janet Leigh plus an article with photos.Tony Curtis (June 3, 1925  September 29, 2010) was an American film actor whose career spanned six decades, but had his greatest popularity during the 1950s and early 1960s. He acted in over 60 films in roles covering a wide range of genres, from light comedy to serious drama. In his later years, Curtis made numerous television appearances. Although his early film roles were partly the result of his good looks, by the latter half of the 1950s he became a notable and strong screen presence. He began proving himself to be a fine dramatic actor, having the range to act in numerous dramatic and comedy roles. In his earliest parts he acted in a string of "mediocre" films, including swashbucklers, westerns, light comedies, sports films, and a musical. However, by the time he starred in Houdini (1953) with his wife Janet Leigh, "his first clear success," notes critic David Thomson, his acting had progressed immensely.The Screen Stories have been autographed on the front cover by Tony Curtis with a fountain pen in black and Janet Leigh with a fountain pen in blue............BOTH MAGAZINE AND AUTOGRAPHS ARE IN AVERAGE CONDITION...................... 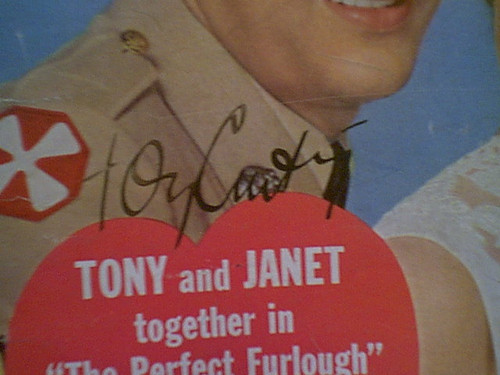