TV Guide Magazine-August 10-16,1957. This vintage TV Guide Magazine-which originally sold for fifteen cents-features a color cover photo of Bob Cummings and Ann B. Davis plus an article with photos.The Bob Cummings Show (also known as Love That Bob) is an American sitcom starring Robert "Bob" Cummings which was produced from January 2, 1955 to September 15, 1959, and originally sponsored by R.J. Reynolds' Winston cigarettes.The series stars Cummings as a dashing young Hollywood photographer, Air Force reserve officer, and ladies' man, Bob Collins. The character's interest in aviation and photography mirrored Cummings' own in real life, with his character's name the same as the role he played in You Came Along (1945). The series also stars Rosemary DeCamp and Ann B. Davis - Charmaine "Schultzy" Schultz - Bob's young, hilarious secretary, pining for him who nixes his love schemes, one way or the other.The TV Guide Magazine has been autographed on the front by Robert Cummings and Ann D. Davis................BOTH MAGAZINE AND AUTOGRAPHS ARE IN VERY GOOD CONDITION........ 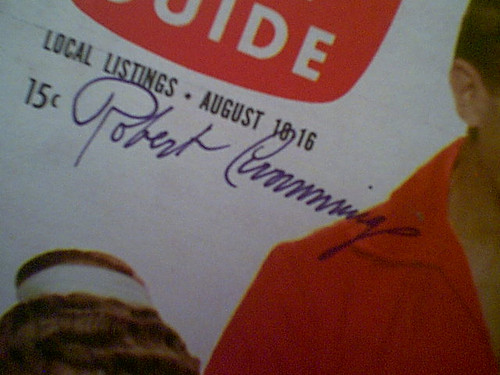