Look Magazine-November 17,1970-86 pages. This vintage Look Magazine-which originally sold for fifty cents-features a color cover photo of newsman Walter Cronkite plus an article with photos.Walter Cronkite was called "the most trusted man in America" during his two decades as anchor of The CBS Evening News. Cronkite was a correspondent for United Press International during World War II, then joined CBS television in 1950 as a reporter. He became the evening news anchor in 1962 and held that post until his retirement in 1981, ending each broadcast with "...and that's the way it is," his television signature. Cronkite became America's most famous news anchor at a time when the country had only three broadcast networks and when television was beginning to dominate the news business. Unflappable and avuncular onscreen, Cronkite was also called "Old Ironpants" for his long stints onscreen during political conventions and moon launches. He was replaced in 1981 by Dan Rather, who remained in the post until 2005. Cronkite's autobiography, A Reporter's Life, was released in 1997, and he also hosted a series for the Discovery Channel, Walter Cronkite Remembers.The Look Magazine has been autographed on the front cover by Walter Cronkite....................BOTH MAGAZINE AND AUTOGRAPH ARE IN AVERAGE CONDITION.......... 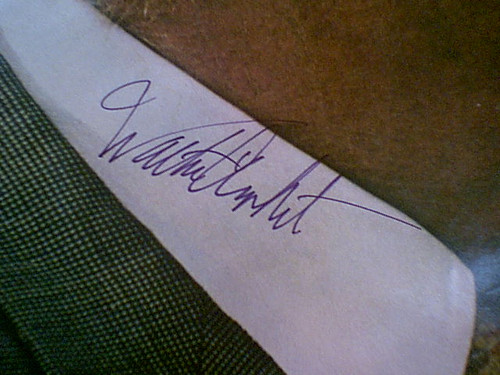