This item is an 8" X 10",color photo of Tom Cruise and Jamie Foxx in a photo advertisement for the 2004 Movie-"Collateral"Collateral is a 2004 American crime thriller film starring Tom Cruise and Jamie Foxx about a taxi driver who finds himself the hostage of a contract killer and attempts to save both himself and a victim. It was directed by Michael Mann and written by Stuart Beattie. The film is set in Los Angeles, California. In an HBO movie review, director Michael Mann stated that the film takes place on the night of January 24 to 25, 2004 from 6:30 PM to 5:40 AM. Foxx was widely praised for his performance and was nominated for the Academy Award for Best Supporting Actor.The photo has been autographed on the front by Tom Cruise and Jamie Foxx.............BOTH PHOTO AND AUTOGRAPHS ARE IN VERY GOOD CONDITION. 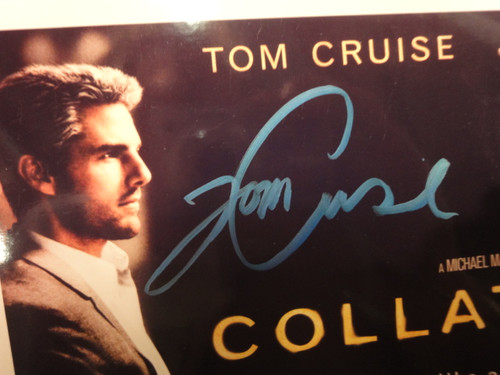