This item is an 8" X 10",black and white photo of Craig Russell in the 1987 Movie-"Too Outrageous!". Also included are an additional 8-8" X 10" photos of original scenes from the movie.Filmed in Canada, Too Outrageous is the belated sequel to the 1977 cult classic Outrageous. Craig Russell is back as gay hairdresser-turned-female impersonator Robin Turner, as is Hollis McLaren as his mentally unbalanced girlfriend. We learn that since last we saw him, Robin has become quite successful on the New York nightclub circuit with his imitations of Streisand, Garland et. al. We also learn that McLaren is as mixed-up as ever; this time she falls under the spell of a duplicitous bartender. That Too Outrageous isn't up to the standards of the original can be attributed to the fact that what was outrageous in 1977 was merely bemusing ten years later. One photo has been autographed on the front by Craig Russell..................BOTH PHOTOS AND AUTOGRAPH ARE IN VERY GOOD CONDITION................. 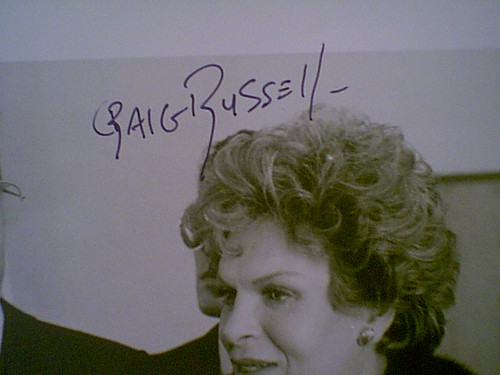