Francis Harry Compton Crick OM FRS (8 June 1916 – 28 July 2004) was an English molecular biologist, biophysicist, and neuroscientist. He, James Watson, Maurice Wilkins and Rosalind Franklin played crucial roles in deciphering the helical structure of the DNA molecule. Crick and Watson's paper in Nature in 1953 laid the groundwork for understanding DNA structure and functions. Together with Maurice Wilkins, they were jointly awarded the 1962 Nobel Prize in Physiology or Medicine "for their discoveries concerning the molecular structure of nucleic acids and its significance for information transfer in living material". Crick was an important theoretical molecular biologist and played a crucial role in research related to revealing the helical structure of DNA. He is widely known for the use of the term "central dogma" to summarise the idea that once information is transferred from nucleic acids (DNA or RNA) to proteins, it cannot flow back to nucleic acids. In other words, the final step in the flow of information from nucleic acids to proteins is irreversible. During the remainder of his career, he held the post of J.W. Kieckhefer Distinguished Research Professor at the Salk Institute for Biological Studies in La Jolla, California. His later research centred on theoretical neurobiology and attempts to advance the scientific study of human consciousness. He remained in this post until his death; "he was editing a manuscript on his death bed, a scientist until the bitter end" according to Christof Koch. The book has been autographed on the title page by Francis Crick......................BOTH BOOK AND AUTOGRAPH ARE IN EXCELLENT CONDITION. 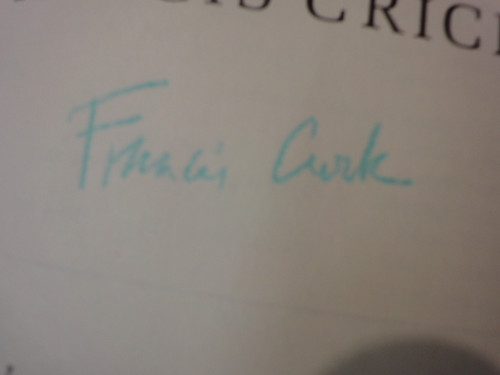