This item is an 8" X 10 1/2",black and white print of a charcoal sketch of actor Bing Crosby. The portrait print is from 1962 and features Bing Crosby as he starred in the 1944 Movie-"Going My Way".Going My Way is a 1944 American musical comedy-drama film directed by Leo McCarey and starring Bing Crosby and Barry Fitzgerald. Based on a story by Leo McCarey, the film is about a new young priest taking over a parish from an established old veteran. Crosby sings five songs in the film.It was followed the next year by a sequel, The Bells of St. Mary's. Going My Way was the highest-grossing picture of 1944, and was nominated for 10 Academy Awards, winning 7, including Best Picture. Its success helped to make movie exhibitors choose Crosby as the biggest box-office draw of the year, a record he would hold for the remainder of the 1940s. After World War II, Bing Crosby and Leo McCarey presented a copy of the motion picture to Pope Pius XII at the Vatican. The portrait print has been autographed on the front by Bing (Crosby) with a fountain pen in blue............BOTH PORTRAIT PRINT AND AUTOGRAPH ARE IN VERY GOOD CONDITION. 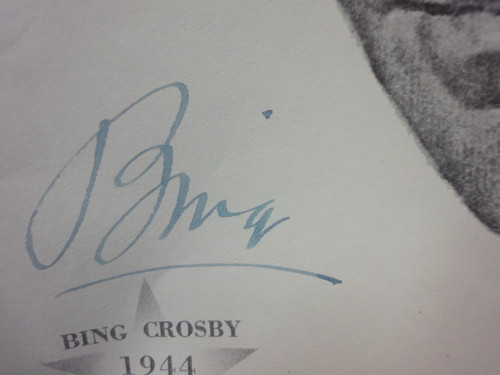