Leisure Time Magazine-January 3, 1954-32 pages. This local television listing magazine-which originally sold for five cents-features a cover photo of Bing Crosby plus an article with photos.Bing Crosby was one of the biggest American music and movie stars of the mid-20th century, and his recording of "White Christmas" is perhaps the best-known holiday pop song of all time. Bing Crosby started out as a member of the Rhythm Boys, a jazz vocal trio, before going solo in the early 1930s. He quickly became a radio star as a silky-smooth crooner who could sing both pop and jazz. As such he is often credited with inspiring Frank Sinatra and other modern pop singers. (Crosby's languid improvisation, "buh-buh-buh-boooo," was widely parodied.) Crosby also became a film star, winning an Oscar for his portrayal of a good-natured priest in the 1944 movie Going My Way. His long-running comic feud with comedian Bob Hope was milked for laughs on their radio and TV shows, and they co-starred in a series of movies that became known as the "road films": The Road to Singapore (1940), The Road to Hong Kong (1962) and five other films between. (Their co-star in many of the road movies was actress Dorothy Lamour.) Bing Crosby first sang the tune "White Christmas" in the movie Holiday Inn (1942); his recording of the tune remains a holiday favorite, and for many years was the biggest-selling single of all time. (The song's popularity led to another Crosby film, White Christmas, in 1953.) In the 1960s and '70s Bing's annual Christmas special was a popular TV fixture. He died in 1977 on a golf course in Spain, having just completed the 18th hole.The magazine has been autographed on the front cover by Bing Crosby with a fountain pen in brown............BOTH MAGAZINE AND AUTOGRAPH ARE IN VERY GOOD CONDITION. 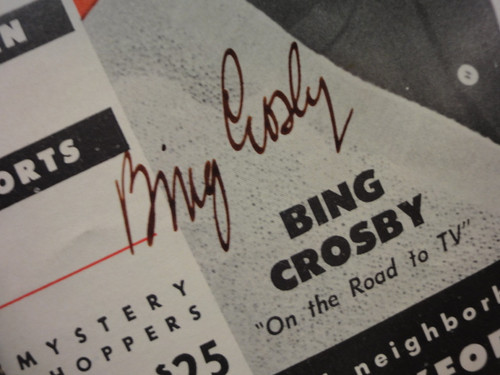