This item is a 12" X 12",color lithograph photo of Sir Terence Conran.Sir Terence Orby Conran, FCSD, (born 4 October 1931) is an English designer, restaurateur, retailer and writer.Conran started his own design practice in 1956 with the Summa furniture range and designing a shop for Mary Quant. In 1964 he opened the first Habitat shop in Chelsea with his third wife Caroline Herbert, which grew into a large chain selling household goods and furniture in contemporary designs. In the mid-1980s, Conran expanded Habitat into the Storehouse plc group of companies that included Mothercare and Heals but in 1990 he lost control of the company. His later retail companies include the Conran Shop and FSC-certified wood furniture maker Benchmark Furniture, which he co-founded with Sean Sutcliffe in 1983.He has also been involved in architecture and interior design, including London's Michelin House (which he turned into the restaurant Bibendum) and the Bluebird Garage both in Chelsea. Conran had a major role in the regeneration in the early 1990s of the Shad Thames area of London next to Tower Bridge that includes the Design Museum which is managed by the Conran Foundation.Conran has also created various other London restaurants including the Soup Kitchen, Orrery, Quaglino's, Mezzo (restaurant), Pont de la Tour, Blueprint Cafe, Butler's Wharf Chop House, together with restaurants in various other countries. In 2005 he was named as the most influential restaurateur in the UK by CatererSearch, the website of Caterer and Hotelkeeper magazine. In 2007, 49% of the entire Conran restaurant business was sold to D&D, a company run by two former Conran employees, Des Gunewardena and David Loewi.In 2008, he returned to the restaurant business on a personal basis by opening Boundary in Shoreditch, East London, a restaurant/bar/cafe/meeting room complex.This was followed in 2009 by Lutyens, a restaurant and private club within the former Reuters building in Fleet Street London.He has written and published various books, particularly on interior design. Many were published by Conran Octopus, a division of Octopus Publishing Group, a cross-platform illustrated book publisher founded by Sir Terence and Paul Hamlyn.The color lithograph photo has been autographed on the front by Terence Conran..............BOTH PHOTO AND AUTOGRAPH ARE IN VERY GOOD CONDITION. 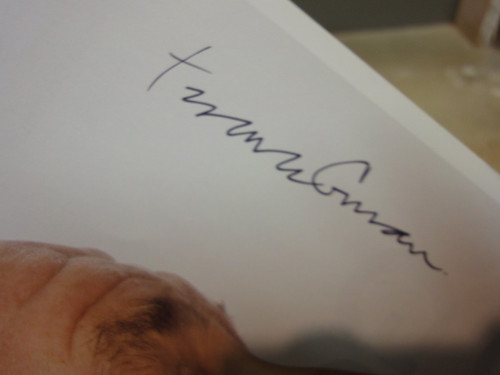