This item is an original 5" X 7" Associated Press photo of mobster Frank Costello. The photo was originally published in The Philadelphia Evening Bulletin Newspaper There is an Evening Bulletin Reference Library stamp with dates on the back of the photo plus original Editor's markings. Frank Costello, original name Francesco Castiglia, (born Jan. 26, 1891, Cosenza, Italy—died Feb. 18, 1973, New York, N.Y., U.S.), major American syndicate gangster, a close associate of Lucky Luciano, noted for his influence with politicians. Arriving in New York City at the age of four with his immigrant Calabrian parents, Costello grew up in East Harlem and became head of the 104th Street Gang, a group of young Italian hoodlums. In 1915 he went to prison for a year for carrying a concealed weapon; on release he allied himself with Lucky Luciano and, in the course of the 1920s, branched into bootlegging and gambling operations in New York, Florida, Louisiana, and other states. In 1931, after the death of crime bosses Giuseppe Masseria and Salvatore Maranzano, Costello became the syndicate’s political link and Luciano’s closest aide, quietly taking over his syndicate interests when the boss of bosses was deported to Italy in 1946. He also gathered interests in Las Vegas gambling casinos and socialized with New York politicians and businessmen. In 1951 Costello began his long battle with the U.S. government. Refusing to answer certain questions during public hearings of the U.S. Senate investigating committee headed by Estes Kefauver, he was cited for contempt and sentenced to 18 months in prison; he was thereafter convicted of income-tax evasion and received another five years. Out on bail briefly in 1957, he had to contend with another threat, from his major rival for supremacy in New York’s crime cartel, Vito Genovese. On the night of May 2, 1957, Costello was shot in his hotel lobby by a Genovese gunman (allegedly Vincente Gigante) but survived. That same year he was convicted again, for contempt of a grand jury, and for the next several years served out his several sentences, obtaining release on June 20, 1961, but losing U.S. citizenship that same year. His power in the syndicate was through; even after Genovese’s death in 1969, when Costello reluctantly moved to try to provide leadership for the foundering New York rackets, his role was limited to advice and arbitration of disputes, far removed from day-to-day operations. He died of a heart attack at age 82. The photo has been autographed on the front by Frank Costello..............BOTH PHOTO AND AUTOGRAPH ARE IN VERY GOOD CONDITION. 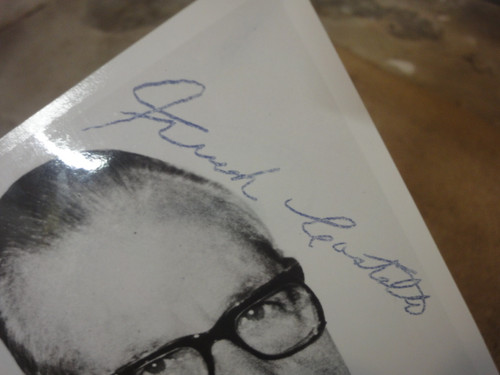