This item is an 8" X 10 1/2",black and white lithograph photo of actor Sean Connery. The black and white lithograph photo has been mounted on an 8" X 10 1/2" piece of photography paper.Sean Connery was the first, and is possibly still the most beloved, of the actors to play superspy James Bond in feature films. Connery was a bodybuilder who turned to acting, making his way into the movies in the late 1950s. In 1963 he starred as Bond in Dr. No, and by 1971 he had appeared in five more Bond movies, quitting the role after Diamonds Are Forever. He managed to break free of the Bond stereotype in the 1970s, thanks to movies such as the 1975 adventures The Wind and the Lion (with Candice Bergen) and The Man Who Would Be King (with Michael Caine). During the 1980s and '90s he appeared in dozens of films, and won an Oscar for his supporting role as a grizzled Irish cop in The Untouchables (1987). Eternally hunky and no-nonsense, even as a senior citizen Connery continued to play the love interest to younger actresses such as Catherine Zeta-Jones (in 1999's Entrapment). He also returned to the role of Bond in Never Say Never Again (1983, with Kim Basinger. Although Connery was first denied a knighthood by Britain in 1998 for his support of Scottish nationalism, he was eventually knighted in 2000 by Queen Elizabeth II.The lithograph photo has been autographed on the front by Sean Connery..........BOTH PHOTO AND AUTOGRAPH ARE IN VERY GOOD CONDITION................... 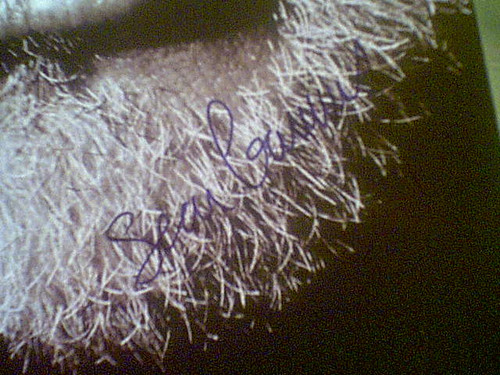