Original Cast-"The Critic"(Decca 9154)-LP.RARE 1960S ORIGINAL CAST (may be a STUDIO CAST, appears to be British production) starring the legendary NOEL COWARD, MEL FERRER, GEORGE BAKER, BARBARA JEFFORD, JOHN MOFFATT; DENIS COMPER director. CULT COLLECTIBLE LP! The Critic: or, a Tragedy Rehearsed is a satire by Richard Brinsley Sheridan. It was first staged at Drury Lane Theatre in 1779. It is a burlesque on stage acting and play production conventions, and Sheridan considered the first act to be his finest piece of writing. One of its major roles, Sir Fretful Plagiary, is a comment on the vanity of authors, and in particular a caricature of the dramatist Richard Cumberland who was a contemporary of Sheridan.The LP has been autographed on the front cover by Noel Coward with a fountain pen in black and Mel Ferrer with a fountain pen in brown................................CONDITION OF VINYL,COVER AND AUTOGRAPHS IS VG. 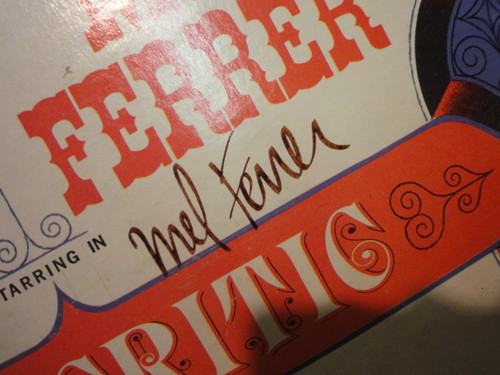