This item is an 8" X 10", black and white photo of actor Chuck Connors as he appeared in the popular television sereis-"The Rifleman". Kevin Joseph Aloysius "Chuck" Connors (April 10, 1921 – November 10, 1992) was an American actor, writer, and professional basketball and baseball player. He is one of only 13 athletes in the history of American professional sports to have played both Major League Baseball (Brooklyn Dodgers 1949, Chicago Cubs, 1951) and in the National Basketball Association (Boston Celtics 1947–48). With a 40-year film and television career, he is best known for his five-year role as Lucas McCain in the highly rated ABC series The Rifleman (1958–63)............The Rifleman is an American Western television program starring Chuck Connors as rancher Lucas McCain and Johnny Crawford as his son Mark McCain. It was set in the 1880s in the fictional town of North Fork, New Mexico Territory. The show was filmed in black and white, in half-hour episodes. The Rifleman aired on ABC from September 30, 1958, to April 8, 1963, as a production of Four Star Television. It was one of the first primetime series on US television to show a single parent raising a child.The program was titled to reflect McCain's use of a Winchester Model 1892 rifle, customized to allow repeated firing by cycling its lever action (an anachronism, because the model was not manufactured until after the period of the show's setting). He demonstrated this technique in the opening credits of every episode, as well as a second modification that allowed him to cycle the action with one hand using a technique known as "spin-cocking". The photo has been autographed on the front by Chuck Connors.Please note that Chuck Connors signed this photo at an advanced age-so there are tremors in the signature.......................BOTH PHOTO AND AUTOGRAPH ARE IN VERY GOOD CONDITION. 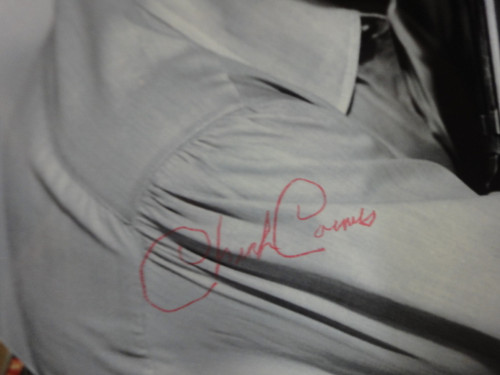